OMAHA — August 4, 2015 — American Midwest Ballet’s dancers head back to work this week with more performances than ever before in a single season.
“Our first work day is Tuesday — and we launch straight into rehearsals,” said Erika Overturff, American Midwest Ballet’s founder and artistic director.  “Season six is our busiest ever in terms of the number of productions — season shows, touring, and collaborations — and that means lots of ballets to learn. It’s a good thing our dancers love to dance, because we are going to be dancing nonstop from day one!” 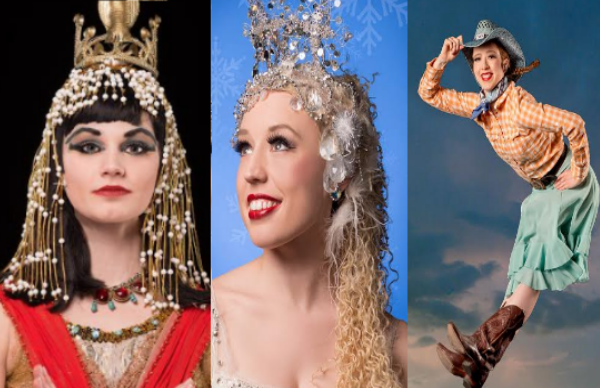 Cleopatra
The company’s season opens Friday, October 2 at the Orpheum Theater with the majestic Cleopatra, Overturff’s original ballet featuring ancient Egypt’s last queen. Audiences can see a preview of Cleopatra when American Midwest Ballet performs at Opera Omaha’s Opera Outdoors event at Turner Park on September 11.
Among American Midwest Ballet’s most memorable productions, Cleopatra first premiered in 2012. Staging it at the Orpheum will only add to its dramatic impact, according to Overturff. “Cleopatra is a fascinating historical figure, renowned for her beauty, intelligence, and political adeptness,” she said. “Her story is both an epic clash of empires and a deeply personal drama — an ideal showcase for ballet’s ability to combine visual spectacle with intimate emotion.”
The Nutcracker
A completely new version of the iconic Waltz of the Flowers scene awaits audiences as The Nutcracker returns for its holiday run with a pre-Thanksgiving show on November 22 at the Arts Center, followed by three performances December 5 and 6 at the Orpheum Theater.
“Waltz of the Flowers features new visual and stylistic variety with each dancer portraying a different flower,” says Overturff. “For the first time, I am incorporating a male dancer into this dance which allows for exciting partnering sequences.”
Momentum: Go West!
American Midwest Ballet’s award-winning annual mixed repertory program, Momentum, will wrap up season six on April 1 at Joslyn Art Museum and April 3 at the Arts Center. Momentum features a sparkling mix of short ballets in a wide range of styles, with a spotlight on the premiere of Overturff’s newest work, Go West!  As part of American Midwest Ballet’s ongoing collaboration with Joslyn, the original ballet was created in celebration of the museum’s upcoming featured exhibition Go West! Art of the American Frontier from the Buffalo Bill Center of the West.
“My new ballet is inspired by the spirit and stories of the American West,” says Overturff. “I don’t want to give too much away, but you can expect cowboys, tumbleweeds, and yodels galore!”
Four Florida Tours
American Midwest Ballet doubles its touring schedule this season as the company heads to Florida’s Ballet Vero Beach for four productions.
“We will return to Vero Beach Performing Arts Center in January and April,” says Overturff. “New this year are two additional  productions at Vero Beach Museum of Art in November and February.”
Opera Omaha, Omaha Performing Arts, Omaha Symphony
As part of an ongoing partnership with Opera Omaha, American Midwest Ballet’s professional dancers perform in Rossini’s The Barber of Seville at the Orpheum Theater in October.
The company also appears October 16 in Omaha Performing Arts’ Celebrate 10 anniversary event with a performance at the Holland Center.
Later this season, American Midwest Ballet makes its much-anticipated debut with the Omaha Symphony in the April 24 concert Peter and the Wolf at the Holland.
“Everything that’s happening in season six is a tribute both to American Midwest Ballet’s rising reputation and to our growing support from audiences, sponsors and donors,” says Overturff. “It’s going to be an exciting year,” she adds.”I can’t wait to get started!”
Learn more about American Midwest Ballet’s season six performances
Get tickets