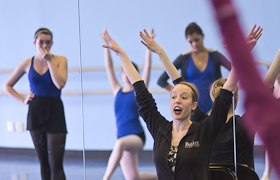 American Midwest Ballet will wind up its debut season May 21 and 22 at the Rose Theater just the way its artistic director had hoped: performing one of her favorites, ‘A Midsummer Night’s Dream.’
“When we started American Midwest Ballet, selecting works for our first season was an exciting prospect,” Erika Overturff said. “We had the opportunity to present works that I felt were really special.
“And I’ve loved this ballet from the first moment I saw it. It’s so beautiful… it’s such a great story… and it’s so much fun to dance!”
Sharing that fun, Overturff said, will be American Midwest Ballet’s largest cast to date. American Midwest Ballet’s company of 11 professional dancers will take the leading roles, backed by its eight-member student ensemble, American Midwest Ballet II. Joining them will be more than 80 guest and community performers, ranging from six-year-old stage newcomers to experienced adult actors and dancers, she said.
Created by internationally regarded choreographer Oskar Antunez, the ballet closely follows William Shakespeare’s intricate storyline, Overturff said. One of Shakespeare’s most popular and widely-staged plays, A Midsummer Night’s Dream is an imaginative comedy involving a contest of wills between Oberon and Titania, the King and Queen of the Fairies, complicated by two mismatched pairs of human lovers and a band of bumbling amateur actors, all of whom have strayed into the fairies’ realm on a midsummer night.
“It’s a great story to tell through dance, because ballet is really good at communicating characters and relationships through action,” Overturff said. “Oskar’s choreography tells you exactly who everyone is, what they’re doing, and how they feel about it. It conveys the story in a way that’s perfectly clear, fast-paced, and very funny.”
American Midwest Ballet’s performances of A Midsummer Night’s Dream will be at 7:30 pm on Saturday, May 21, and 2 pm Sunday, May 22, at the Rose Theater.
Ticket information is available from Ticket Omaha, 402-345-0606; online at www.ticketomaha.com; or in person at the Ticket Omaha box office in the Holland Center, 13th and Douglas Streets.
A Midsummer Night’s Dream is presented with the support of the Mutual of Omaha Foundation, the Lincoln Financial Foundation, the Nebraska Arts Council, and the Nebraska Cultural Endowment.
See dancers at work in studio rehearsals for A Midsummer Night’s Dream:
[portfolio_slideshow exclude=”2730″ showcaps=true]