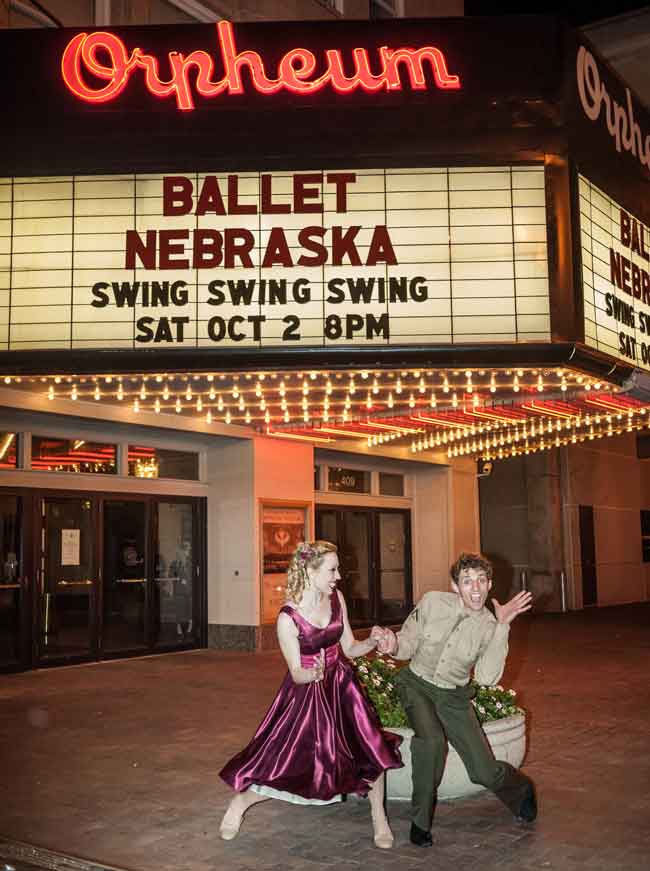 It was just after 10 p.m. on Saturday, October 2, 2010. Erika Overturff, breathless from two hours onstage, was still in costume as she ran outside to pose for commemorative photos under the Orpheum Theater marquee. The new ballet company she had founded had just completed its first mainstage production: Harrison McEldowney’s Swing, Swing, Swing!

Now, fast-forward to one week from tonight – April 2, 2022. The company Erika founded, and still leads, is now American Midwest Ballet. Its original 12-member roster has grown to 23 professional dancers from across the US and two foreign countries, and it is now based in state-of-the-art studios in Council Bluffs’ Hoff Family Arts & Culture Center.

And it’s about to wrap up its twelfth season of professional dance with the same ballet that started it all.

“It’s time to celebrate,” Erika said, “and a great time to bring back Swing, Swing, Swing!”

“The energy they bring to the stage is incredible…”

The ballet is a tribute to the Second World War’s “Greatest Generation,” with a central love story framed by dance vignettes that draw on the era’s popular styles.

“It’s terrifically entertaining because it’s so varied,” Erika said. “Harrison McEldowney has an amazing creative range – he choreographs for everything from classical ballet companies to cruise ships, and the Olympics to Carnegie Hall. In Swing, Swing, Swing! he incorporates jiving G.I.s, tap dancers, Lindy hoppers, and Rosie the Riveters en pointe. There’s a beautiful movie-musical-style romantic duet that rolls right into a full-on bar fight. The dancers love performing this ballet because they get to use so much of their movement vocabulary.”

Another memorable feature of the ballet is the jazz combo that performs Big Band music live onstage with the dancers. For 2022, Erika said, bandleader Doyle Tipler has brought back the members of the DoyleMusic Combo who performed in the original production.

“I was thrilled when I heard that Doyle was getting the band back together,” she said. “The energy that they bring to the stage is incredible, and the dancers amplify that energy. Suddenly you feel like you’re really in a ‘40s nightclub, having a great time dancing to a fabulous band.”

As American Midwest Ballet completes its twelfth season, Erika said, it is doubly satisfying to return to the ballet that started it all — performing in both the company’s newest venue, the Hoff Family Arts & Culture Center, and at the Orpheum, where it all began.

“We’ve been working hard for twelve years,” she said. “It’s special coming back to Swing, Swing, Swing! because we can stop and see just how far we’ve come.

“And we can also recapture the excitement of that first season — of putting on a show and having an audience and being a company. It’s a way of coming full circle.”