OMAHA — Sept. 15, 2014 — American Midwest Ballet opens its fifth anniversary season October 4 at Omaha’s iconic Orpheum Theater with Giselle — a landmark ballet of the Romantic Era that is both a poignant love story and a chilling tale of vengeful ghosts, artistic director Erika Overturff said.
Giselle put ballet at the center of the Romantic movement,” Overturff said. “Its premiere at the Paris Opéra in 1841 showed what could be accomplished when a dramatist, a choreographer, a dancer and a composer worked together as a tight-knit creative team to tell an engaging story. Giselle proved to everyone — inside the dance world and out — the power that comes from integrating art forms into a work of total theater.” 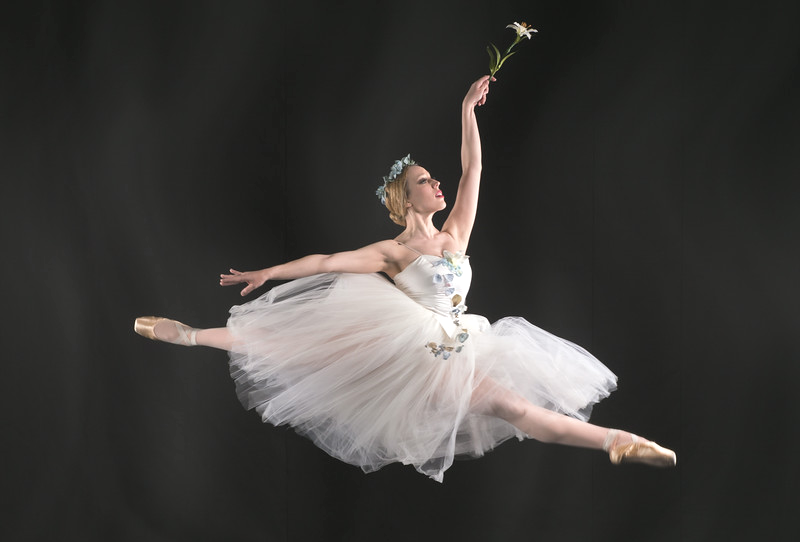 Act I of the ballet introduces Giselle, a charming peasant girl living in a nineteenth century Rhineland village. She is delighted to be pursued by the handsome young Albrecht — which breaks the heart of Hilarion, a fellow peasant who is also in love with Giselle. Upon discovering that Albrecht is a nobleman in disguise — and already engaged to a young aristocrat, Bathilde — Hilarion breaks the news to a devastated Giselle. Born with great passion but a very weak heart, Giselle goes mad. She finally collapses, dying of a broken heart, in every sense.
But that is merely the beginning of the story. In Act II, Giselle’s spirit wanders the forest alongside the ethereal wilis (pronouced wil-lees). These beautiful yet vengeful ghosts also died from broken hearts at the hands of their fiances. Led by their powerful queen, Myrtha, the wilis seek revenge on all men who wander in their domain by dancing them to their deaths. When Albrecht unexpectedly roams through the forest, Giselle begs the wilis to spare his life and does everything in her power to protect him. She is able to do what the other wilis could not: forgive. It is in forgiveness that Giselle is freed from the eternal anger, sadness and pain which bind the wilis to their past.
“Giselle is a dream role for a ballerina,” Overturff said. “It draws on great skills both as an actress and as a dancer: transitioning from a carefree country girl, to a heartbroken madwoman, to an ethereal spirit. The rest of the ballet is filled with a colorful variety, with scenes ranging from joyful peasant dances to ghostly apparitions. The music, the action, and the drama sweep you along as would a movie.”
Giselle’s enduring appeal, Overturff said, is that its emotions are utterly authentic.
“Everyone can relate to the feelings these characters experience: the excitement of falling in love, the sting of jealousy, the heartache of betrayal, the weight of guilt and grief,” she said. “We’ve all been hurt by someone we care about – and have had to decide whether to hold a grudge or to forgive.”

Tickets for the one-night only performance of  Giselle are on sale now.
Orpheum Theater | Oct. 4 | 7:30pm
Omaha Steaks is the Season Sponsor for American Midwest Ballet’s Season 5. Major support for Giselle is provided by the Iowa West Foundation, with additional support by the Lincoln Financial Foundation, the Nebraska Arts Council, and the Nebraska Cultural Endowment.
American Midwest Ballet is the region’s professional dance company.