“I was five years old when I performed in the Lullaby League,” says Alarcon of her first performance in a ballet production.

The experience served to spark a lifelong affection for the L. Frank Baum classic and its iconic characters.

“Every memory I have [of that production], from rehearsals through performances, is filled with an overwhelming sense of joy,” recalls Alarcon.

Twenty-five years and a lifetime of fond memories later, Alarcon’s love of all things Ozian finally comes to life at the Orpheum Theater as American Midwest Ballet premieres Alarcon’s original version of The Wizard of Oz in Omaha on May 4.

Alarcon shared some thoughts on choreographing her first full-length ballet while dancing the lead role of Dorothy. 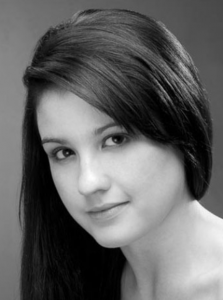 How long have you been working on this ballet?

It has been a dream of mine to choreograph The Wizard of Oz for as long as I can remember! The first time I thought it might be a real possibility was during the third season of what was then Ballet Nebraska. Erika Overturff, Bret Samson and I were traveling to Spirit Lake, IA to audition students for our touring production of The Nutcracker. I casually mentioned that I’d always wanted to choreograph a version of The Wizard of Oz and we all talked through some ideas that I  had.

Later that season, Erika asked me to flesh out some ideas and send them to her. It sprang to life from there, and we all have been working on this project on and off since then.

What do you love more: creating this ballet or dancing in it?

That’s a hard one. I love seeing the images I’ve had in my head come to life —  but I also enjoy getting to move to the music that I’ve grown so fond of. Can I say both?

What source materials or other inspiration did you turn to in preparing for this ballet?

My vision for this ballet is that you will feel as if you are watching a child’s imagination come to life. I always wished the characters in my favorite books could jump off the pages and I could join them in their worlds of endless possibility. That is the experience I’m hoping to capture with this ballet.

I am a strong believer that every dancer has something unique to offer and I’m constantly being inspired by the strength of our company. Our dancers have inspired me not only by observing them as artists but also watching them be advocates for the arts throughout our community.

How did you envision this before you began?

I wanted this ballet to be done in the style of my favorite classical ballets. You will see a farm scene that reflects the peasant scenes traditionally found in ballets such as Coppélia and La Fille Mal Gardée. With the Poppy scene, I wanted to pay homage to the Wilis in Giselle; and with the Gift scene, I wanted to give a nod to [legendary choreographer] Marius Petipa.

We always ask you “which came first, the music or the dance” — and you always say the music. In this case, since the story had to come first, walk us through how you made your selections for the score.

The music was one of the hardest parts of this project, but also something that was the most fun to work through.

Since I wanted this to feel like a classical ballet, my first go-to was the obvious: ballet music.  I dove into the world of Johann Strauss II. There is a lovely score Strauss was composing for Cinderella before he passed away. This work served as a musical backbone and starting point for me.

The works of Edvard Grieg also appear multiple times in the score, including In the Hall of the Mountain King from his Peer Gynt Suite. That music has always reminded me of Lions, Tigers, and Bears from the movie. I was able to include other sections of the suite with that piece as a jumping-off point.

With Scarecrow, Tinman and Lion, I wanted each character to have his own sound. I decided the Lion needed a polka; Tinman, a march; and Scarecrow, a waltz.

I don’t want to give too much away ahead of time; so for now, I’ll leave it at that!

What skills did you need to cultivate as you took on creating your first full-length ballet?

Decisions are hard for me. I like to look at every single option before choosing.

In the process of creating this ballet, I had to learn how to be more decisive. For example, since I couldn’t possibly listen to every existing piece of classical music before deciding which to use, I had to learn to trust myself and my vision.

So, what’s your favorite part of this ballet?

That’s like asking a parent who their favorite child is! I love each part in its own way.

What do you personally take away from this ballet? What stays with you?

I think a huge part of the story of The Wizard of Oz is that it’s the people you share your journey with that are most important.

I have had the most incredible people with me during this creative process. I have been so fortunate with the support I have received on this project.

Erin Alarcon’s The Wizard of Oz  makes its world premiere at Orpheum Theater in Omaha on May 4,  with a special touring performance to Sioux City, IA.

Tickets are on sale now.